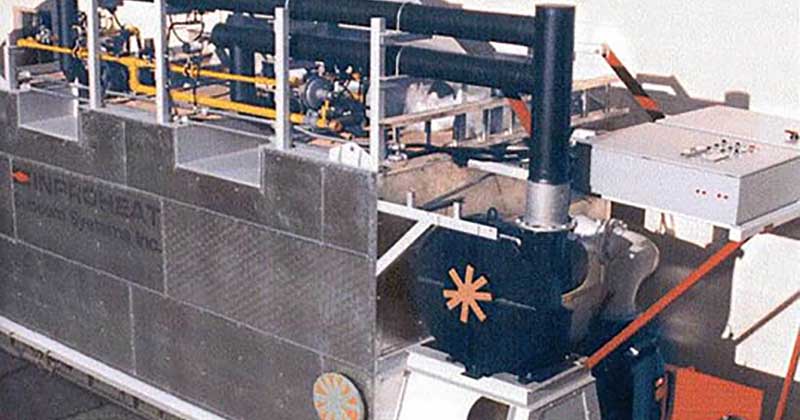 The quality of plywood veneer produced in a veneer plant depends not only on the quality of the logs but also on their condition during the peeling process. If the log is too cold, the veneer breaks easily and the yield from a log and the quality of the final plywood both suffer. In addition, the lathe knives wear out more quickly.

To obtain proper peeling conditions, the log has to be uniformly preheated down to its core. This is typically achieved in two ways: by immersing the log in hot water in a pond system or by spraying hot water on top of the logs in a conditioning chest system.

In a pond system, the log floats for over 24 hours from one end to the other of the 10′ wide x 130′ long pond. In a chest system, a large door is opened at the end of the chest and the chest is filled with logs. The door is then closed and a hot water spray system, located along the chest ceiling, is activated.

In both system types, process water is drained by gravity back to the screening and heating system. The heat absorbed by cold logs has to be replenished back into the process water. In cold northern climates, the heat requirement could be as high as 2 to 3 MM Btu/hr per chest with approximately 8 to 10 chests (or ponds) continuously in operation.

The Ainsworth Lumber CO. in Lillooet, British Columbia, which recently went through a major modernization, decided to expand the heating capacity of its heating plant to meet new higher production demands.

The Ainsworth plant in Lilloet was one of the first veneer plants in North America to apply the submerged combustion heating method to the process water. The original system installed in 1965 was designed to maintain 2400 USgpm flow capacity at 150° F. Over the years, this requirement was doubled to 4,800 USgpm with winter operation up to 165° F.

The original system was based on a concrete pit with two 8 MM Btu/hr burners firing down into the pit. The burners were refractory-lined which made them expensive to maintain due to high moisture presence in the process causing damage to the refractory. The system also had a number of operational problems due to formation of foam from the process water containing organics released from heated logs. In addition, the system had a low thermal efficiency of 62% when operated at target water discharge temperature of 160° F.

In general, the log conditioning water process is difficult due to the high level of water contamination. In a traditional heating system, the solids in the water would coat the heat transfer surfaces leading to poor heat transfer, overheating and failure.

A decision was made to build a second two-burner submerged combustion system rated at 14.0 MM BTU/hr. The new system would include a lift pump sized for 2400 USgpm water flow to be drawn from downstream of the old burners, circulated through the new above-ground tank, and returned back by gravity to the circulating pump pit. Due to the relatively high temperature application (165°F water discharge temperature), a decision was made to proceed with purchase of an Inproheat-patented submerged combustion system with integrated heat recovery unit (HRU) boasting an overall thermal efficiency of 85% at 165°F. This translates to a 23% efficiency gain over the old system, which is equivalent to over $200,000/year in fuel cost savings.

With limited space available for the new heater, Inproheat had to custom-design a rectangular tank to fit between the chest end wall and the circulating pump enclosure. The system was completely skid-mounted, assembled, and wired in the factory and included a high pressure combustion air blower and lift pump.

The system is based on Inproheat-patented refractory-less, self-cooling 316L stainless steel combustion chambers. The chambers are lightweight and easy to maintain, without any refractory materials and simply cooled by the vigorous wave action inside the tank.

An Allen Bradley PLC-5 based control system was provided, enabling independent control of each burner and fully metered air-fuel ratio control. The system is self-tuning and utilizes ambient air temperature compensation. In case of changes in ambient air temperature, fuel pressure, or tank back-pressure due to foam formation, the control system automatically adjusts air-fuel ratio to maintain proper combustion and low levels of carbon monoxide. This control method proved its function in the first few days of operation when the intake combustion air filter froze up, blocking the air flow into the blower suction. The problem was discovered by the operators when the combustion air valves opened fully and the fuel valves closed to low fire. With a typical fixed ratio system, this condition would lead to out-of-ratio firing and unsafe levels of carbon monoxide. In this case, the filter was simply removed and within two seconds the system automatically returned to normal valve positions.

The system efficiency was confirmed at 85% by measuring the stack discharge temperature, which is about 20°F lower than the water discharge temperature. Due to its obvious efficiency gain and fuel savings, the new SubCom system is used to handle the base load for the heating process, with the old burners being used only as needed during the cold weather conditions.

As an add-on system, Inproheat incorporated a pH meter to monitor the condition of the process water and to predict the formation of the foam. The defoaming system was also changed to automatic operation. The system continuously monitors the air flow and the air valve opening. A decrease in air flow coinciding with the increase in the air valve opening is interpreted by the PLC as an increase in foam formation and the defoamer solenoid valve opens, adding a defoaming agent directly into the gas discharge plenum. It is expected that by using defoamer directly and automatically at the critical foaming point – on an as-needed basis – will result in significant savings in the defoamer costs.

As an additional feature, Inproheat programmed the PLC to store approximately one week of operational data including fault history. The PLC was interfaced over the data highway to the plant’s control room, allowing operators to remotely monitor the system’s performance. As part of the ongoing service, Inproheat’s scope of supply included one year of system performance monitoring and reporting. Using Symantec PCAnywhere software, Inproheat logged in weekly to the Ainsworth control system to download the operational data history. The data was analyzed and recommendations were made regarding system adjustments or operation. Any problems with the PLC program itself or tuning the system was easily corrected over the telephone line from Inproheat’s Vancouver office.

Inproheat’s design complies with NFPA, CGA, UL, and CSA requirements. Inproheat owns several US and Canadian patents related to the above technology system configuration and concept. The Ainsworth SubCom system was started up in December 1999 and turned over to full time operation in mid-January 2000.